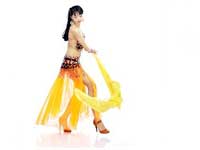 The concept of Belly dancing is a much-debated term in recent days. Many feel that it is an open expression of sensual feelings. However as we delve into the history of this dance form, it is just a folk dance form.

Belly dance originated in Arab countries during the Ancient Babylon days. Adnanite Arabs introduced this dance form during social gatherings when women to while the men played the drums. When Arabs started to settle in Egypt, they adopted the dance and it became a part of Egyptian tradition.

Sudanese dance and dancers from other non-black African countries clearly had a profound if not nascent affect on the art of belly dance. The music, rhythm and steps of belly dance also inspired sirtaki (Syrtaki) dance form in Greece too. Westerners later took interest in this dance form and they termed it as 'Belly dance' other than its original name raqs sharqi.

The costume for belly dance in western countries usually includes a fitted top or bra (usually with a fringe of beads or coins), a fitted hip belt (again with a fringe of beads or coins), and a skirt or harem pants. The bra and belt may be richly decorated with beads, sequins, braid and embroidery. The belt may be a separate piece, or sewn into a skirt.

However as days passed by, the belly dancers were forced to show more skin. After 1950s, there came a ban for belly dance in Egypt because of this. The Egyptian belly dancers traditionally dance in bare feet, but these days often wear shoes and even high heels.