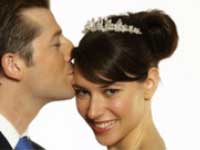 When it comes to making choice of a sexual partner, attitudes of families and the public have little impact on an adult.

Instead, the individual's unique experiences and hereditary factors are the biggest driving force in making him or her decide whether they will have sex with same-sex partner or the opposite sex, says a unique new study.

The study by the Swedish medical university Karolinska Institute (KI) is the largest in the world so far and was performed in collaboration with the Queen Mary University of London.

More than 7,600 Swedish twins (men and women) aged 20-47 years responded to a 2005 - 2006 survey of health, behaviour, and sexuality. Seven percent of the twins had ever had a same-sex sexual partner.

"The results show, that familial and public attitudes might be less important for our sexual behaviour than previously suggested", says Associate Professor Niklas Langstrom, one of the involved researchers.

"Instead, genetic factors and the individual's unique biological and social environments play the biggest role. Studies like this are needed to improve our basic understanding of sexuality and to inform the public debate," Langstrom added.

Overall, the environment shared by twins (including familial and societal attitudes) explained 0-17 percent of the choice of sexual partner, genetic factors 18-39 percent and the unique environment 61-66 percent.