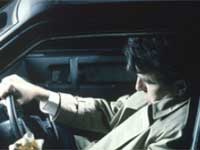 A heated car seat may keep your bottom warm and toasty on a cold night, but the extra 'luxury" may decrease your chances of becoming a father, says a new study.

Scientists say that the seats could damage sperm production by raising men's temperature to unhealthy levels. An optimal temperature of between 35 and 36 degree Celsius is needed to produce healthy sperm. This is one reason why the testicles hang outside the main part of the body.

To test whether heated car seats might be raising scrotal temperatures above this threshold, Andreas Jung at the University of Giessen in Germany and his colleagues fitted temperature sensors to the scrotums of 30 healthy men, who then sat on a heated car seat for 90 minutes.

Sitting in a car for long periods of time, even without a heated seat, is already known to raise scrotal temperatures. And previous research suggests that couples take longer to conceive if the man drives for more than 3 hours a day.

Although that's only a slight increase due to the heated seats, Jung notes that it may nevertheless be enough to damage the sperm production process. The team did not test the effect of the heated seat on sperm quality or quantity