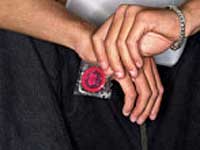 Satisfaction is not about getting orgasm these days but its about the pleasure they find in bed while making love. Dinesh an engineering student says &ldquo;Love making with condoms is like kissing a girl's lips with a plastic bag which gives no pleasure. Every man and woman wants a raw feel of flesh when it comes to intimacy"

After a hard day's work, a couple would want to come home and make their night pleasurable and so here the woman plays a major role, for they think when their better half is back they would dress up, cook a delicious dinner and welcome him happily which would excite the man and would end up in love making. Fondling is what every man and women prefers while making love.

Aakash says &ldquo; Foreplay is what I do more with my partner. I enjoy it and feel it because there is more of body touch while making out and I don't like using condoms. When it comes to the latter it spoils my mood and also the mood of my partner." There are many new varieties of condoms with new flavors which are entering the market and there are people who buy them with the thought of having safe lovemaking in their mind but that's not what they actually want.

Condoms, have also created a mess in a handful of couple's life. Sometimes it is one person who supports its usage and other who doesn't want to and that gradually ends up in a fight. &ldquo; Nikhil an interior designer quotes &ldquo; I like making love without condoms but my partner doesn't allow me to do that. Even she prefers raw but she doesn't want to take any risk even after I assure her about the safety."

Even after the introduction of dotted, ribbed condoms, sensation, superthin, and even the jean condoms, there are couples who push aside the use of it as it is a hindrance when it comes to making love.

In a conclusion, Harish a product designer student from Singapore says, &ldquo;Condom is a barrier. Even the thinnest condoms is a useless thing. All we want is touch and feel, and condoms are just a disturbance."